Spring is on its way. Jan. 26, 2023.
Ice plants.
As objective journalists, we normally don’t take sides. Today, we make an exception: GO NINERS! @49ers
Wikipedia: Kelps are large brown algae seaweeds that make up the order Laminariales. There are about 30 different genera.[3] Despite its appearance, kelp is not a plant - it is a heterokont, a completely unrelated group of organisms.
Winter in the Sunset District. Jan. 21, 2023.
A trip to the beach to watch the sunset is good for the soul.
Restaurant

A series of restaurant closures in the Outer Richmond District has left the northwestern edge of San Francisco without several of its beloved dining spots.

The Cliff House and the Seal Rock Inn Restaurants have closed temporarily to weather the COVID-19 storm. Louis’ has closed its doors permanently.

The August issue of the Richmond Review reported that the Seal Rock Inn Restaurant was closing permanently. After the paper went to press, the general manager of the Seal Rock Inn sent this this email in response to our request for a comment:

Yes, due to COVID, and the uncertainty of when the shelter-in-place order will be lifted, and because the breakfast place is not suited to GrubHub delivery, the restaurant is temporarily closing.
There is no intention of permanently closing our restaurant. Once things return to normal there will be a restaurant here at the Inn.
The Seal Rock Inn restaurant is known for its fantastic omelettes. But until the laws of physic can keep eggs from going cold on a 15-minute delivery, it just did not make sense to continue AT THIS TIME.
Best regards,
Bobby Elam
General Manager

According to a Facebook post written by Scott Miller, a Richmond District resident, the Seal Rock Inn Restaurant faced an impossible situation.

“Unfortunately, another multi-generation family-run Richmond treasure is closing down partly due to COVID-19,” Miller wrote. “Andy, who took over running the restaurant from his father, has been there for over 40 years.” Several attempts to contact Miller for verification were unsuccessful.

The demands of the hotel owner included “raising the rent 50%, patrons of the hotel get free breakfast and lunch (full hotel would be 56 free meals a day) and the restaurant now needs to pay the PG&E bill for the entire hotel,” according to Miller’s post.

Restaurant owner Andy Psarras did not respond to multiple requests for comment. 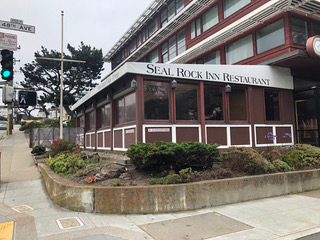 Peta Cooper grew up in the Richmond District and has been a fan of the Seal Rock Inn  Restaurant for many years.

“It’s ridiculous that the landlord expects Andy to pay the whole PG&E bill for the hotel when they’re two separate entities,” Cooper said. “Fair enough, pay for the part of the restaurant. But you’re expecting him to pay for the whole hotel. That’s absolutely ridiculous. And you’re raising the rent in the middle of a pandemic up 50% and then you’re expecting Andy to serve breakfast and lunch for free for your hotel guests. It’s totally unreasonable and I’m absolutely disgusted,” she said.

Cooper said Psarras helped many people in the neighborhood when they were down and out.

“A friend of mine, her grandparent’s house had burned down and Andy was there to provide food,” Cooper said.

Miller claimed in his post that Psarras helped him while he was in the hospital.

The inn and restaurant are separate businesses. The family-owned restaurant had been a popular breakfast and lunch spot for many Richmond locals for decades. The menu offered an array of omelets and a small selection of Greek items.

Breakfast and brunch options are becoming more sparse with every closure. Many businesses are struggling – or losing the battle – to survive due to financial impact caused by the restrictions put in place to fight the spread of COVID-19.

Just down the hill from Seal Rock Inn Restaurant was Louis’ Restaurant, another multi-generation family-owned business that shut down permanently.

Louis’ was established in 1937 by Louis Hontalas and his wife Helen. What started as a simple cafe with a handful of tables overlooking the Pacific Ocean grew into a well-established cash-only diner-style eatery with stunning views. 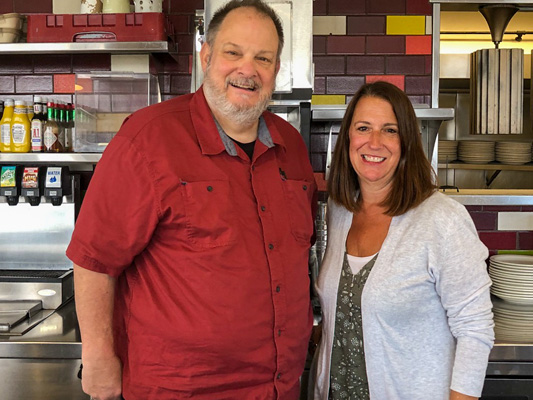 Tom Hontalas and his sister Kathleen pose for a photo in the kitchen of Louis’ Restaurant. The cliffside restaurant overlooking the remnants of the Sutro Baths on the northwestern corner of San Francisco had been in the family since 1937. The business has closed – a casualty of the pandemic caused by the coronavirus. Photo  by Gui Oliveira.

“This decision was very difficult to make, but with everything we have seen and heard regarding reopening for indoor dining, we felt it was an unsafe environment for us and our employees,” Hontalas wrote in a Facebook post. “To wait out this pandemic was financially unreasonable.”

According to Hontalas, the weekend of March 14 was the “slowest weekend of business we ever had.” On March 16 he decided to temporarily close. Then temporary turned permanent. The idea of doing take-out came up, but Hontalas thought it would be more trouble than it was worth. Setting up tables outside was impractical as the restaurant sits on a hill. Louis’ was always strictly a dine-in style of eatery and offering delivery was just out of the question.

Even if he were to somehow open back up, under the six-feet and face-covering rules it would be too difficult working in a “tiny kitchen side-by-side with masks on.”

David Nottage is the owner of another popular spot to get food near the ocean: Kawika’s Ocean Beach Deli on La Playa Street near Balboa.

The Cliff House recently put up a large sign on the front doors explaining the challenging situation and tough decision to temporarily close, which essentially boils down to the “economic pressure” brought on by the pandemic.

“It would be best to preserve our remaining resources to ensure a continuance of future operations,” the notice explained.

“It’s really sad for the Seal Rock Restaurant that’s now closed,” Nottage said. “Louis’ is closed permanently. The Cliff House, they reopened and then had to shut down because they’re huge,” Nottage said.