Viewers had a wide range of emotional reactions – from exuberance, awe and pride to melancholy feelings of nostalgia – on June 18, opening day of the Northern California stop of the Obama Portraits Tour, being exhibited through Aug. 14, at San Francisco’s de Young Museum. (Follow the link in bio to RichmondSunsetNews.com to read the full story.)
Thank you to OneRichmond for your great support. Note: the monthly Meet the Editor session is postponed in July for a well-deserved One Richmond staff break. We’ll be back the second Wednesday in August.
From Wikipedia: The first European to describe these plants was Philibert Commerçon, a botanist accompanying French Navy admiral Louis Antoine de Bougainville during his voyage of circumnavigation of the Earth,
More reasons why we love our job. Many of the subjects of our feature stories are so thrilled to be in the local paper they put the paper up in their store window. And, when we walk by and see it, we’re also thrilled! Thank you, Young Artist Studio!
Work Begins on New Traffic Route in Golden Gate Park
Art

At opposite ends of the Outer Sunset, two local creatives are using visual art to activate public spaces and start conversations among neighbors. Public art inherently invites appreciation and criticism from the community. While many people have expressed gratitude for their work, both artists have experienced vandalism of their pieces.

The Far Out West Community Garden sits on 43rd Avenue and Judah Street, with a three-story residential building on one side. Three large block letters are painted on the edge of the building: G-N-D, top to bottom. The letters continue around the corner, spelling out the words “Green New Deal” and opening up into a huge mural by artist Georgia Hodges. 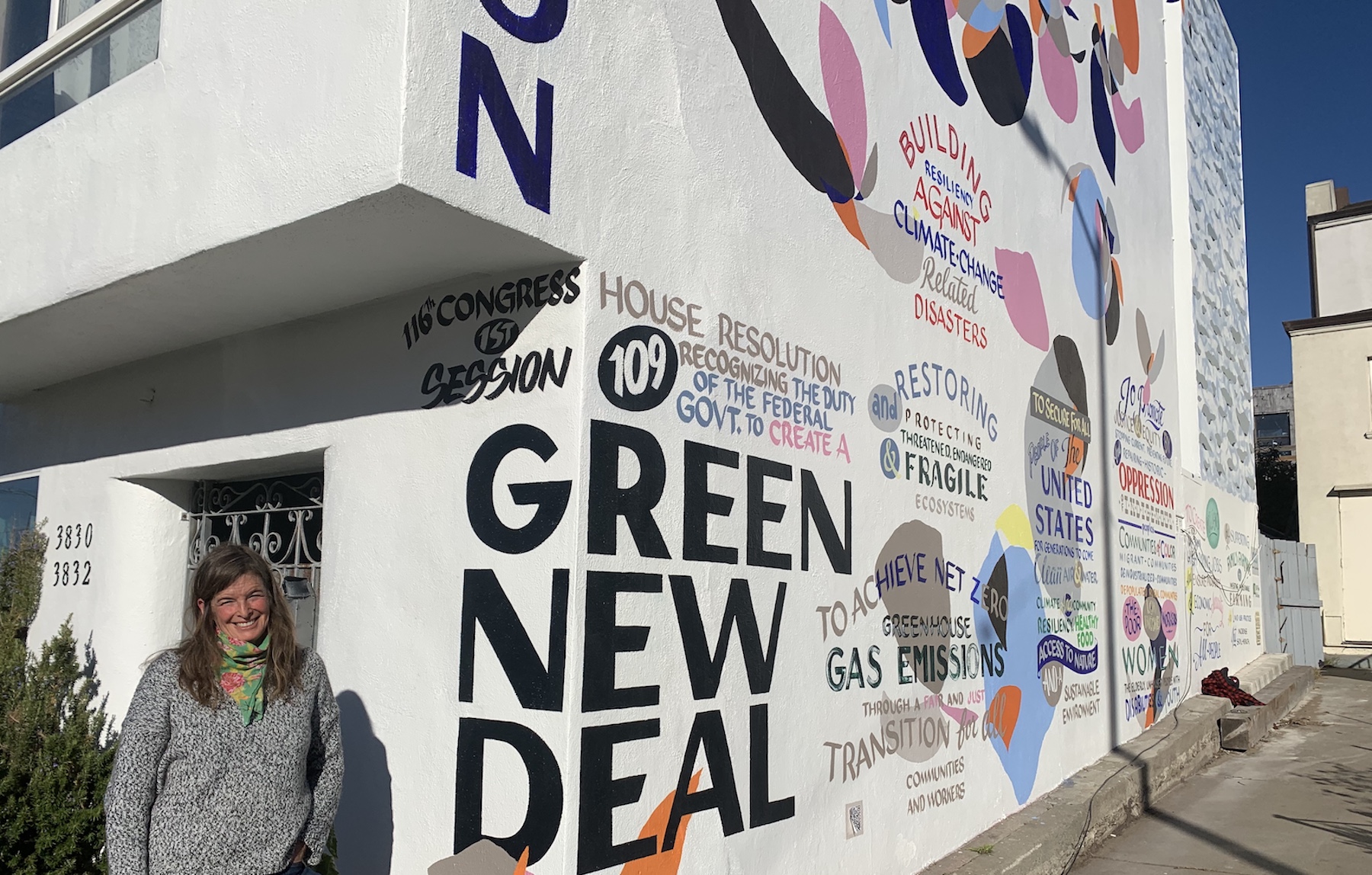 Georgia Hodges stands beside her creation, which was inspired by the Green New Deal resolution introduced in 2019 to the U.S. House of Representatives and the U.S. Senate. The political message motivated Hodges to share the call to protect the environment with the neighborhood at the Far Out West Community Garden at 43rd Avenue and Judah Street. Photo by Becky Lee.

The Green New Deal is a nonbinding congressional resolution that puts forth a broad vision for addressing climate change, but it does not include specific legislation. The mural, completed just before the November elections, features excerpts from the resolution. A QR code links to the full text.

Nearly three years ago, Hodges was approached by the owner of the building to create a mural with a “political statement.”

In early 2019, the Green New Deal was introduced by Rep. Alexandria Ocasio-Cortez of New York and Sen. Edward J. Markey of Massachusetts and signed by 60 House and Senate Democrats.

Hodges heard that Ocasio-Cortez read the entire resolution out loud in under 20 minutes and decided to read the original text for herself.

“I was really deeply moved,” she said.

Hodges is an abstract painter and ceramicist whose work is driven by a “deep love of nature and the environment.” Her work uses color, shape, and composition to inspire a reverence for the natural world. She has lived in the Sunset since 1999.

One of her sculptures, “Ocean on Fog,” features a mushroom-like base topped with silvery folds of clay and a bright blue mass. In her painting “Shell Bits,” delicate line work connects blots of gray and blue watercolor, like the broken pieces of shells that wash up with the tide.

Hodges felt the content of the Green New Deal aligned with her mission as an artist, but working the text of a congressional document into an art piece was a departure from her typical process.

She brought on sign painter David Benzler to do the lettering and ensure the text was readable from a distance. She created a backdrop of abstract shapes and colors and selected a set of passages she found particularly inspirational. Benzler created the layout, weaving the text and shapes together across the nearly 40-foot-tall space.

The mural invites viewers to engage directly with the primary text of a congressional resolution in between colorful shapes that spark the imagination.

“It is a really creative act to come up with solutions to a really complex problem,” she said.

Hodges and filmmaker Jeff den Broeder are in the process of creating a documentary about the making of the mural and the words that inspired it. When it is safe to gather again, they will continue activating the space through events and classroom visits.

The mural was funded by the city of San Francisco’s Community Challenge Grant Program. For Hodges, even the act of applying for and receiving the grant is an example of what is possible through civic engagement.

For now, she hopes the mural creates a sense of optimism and inspires whoever passes by to take action.

“You can’t separate humanity from the planet,” Hodges said. “It’s worth protecting, and we as a society can do it.”

Her message did not resonate with everyone in the community, however. Recently, the wall was vandalized with the words “Commie propaganda” spray painted in red on the mural.

Hodges remains resolute. In response, she posted a photo of the damage on her Instagram account. The caption said: “The #greennewdeal is about making room for everybody. […] We can get on the same page. I know it.”

Meanwhile, across town, a separate series of public art installations popped up along the Upper Great Highway – and then came down.

In June, following the killing of George Floyd in Minneapolis, artist Ana Teresa Fernandez created an installation featuring Floyd’s words, “I can’t breathe,” stenciled into a mirrored surface. She attached the mirror to an A-frame stand and put the artwork on the now-closed Upper Great Highway, where hundreds of people passed it every day.

“People come out here to get fresh air, so let’s have a dialogue with that,” Fernandez said. “What does it mean to have your image reflect on his words and his name?”

Fernandez was born and raised in Tampico, Mexico. She graduated from the San Francisco Art Institute, where she earned bachelor and master of fine arts degrees. In addition to being a full-time artist, she has held a variety of teaching positions and sees art as a way to help her students “process the world.”

She has participated in artist residencies in Brazil, South Africa and Haiti, working closely with local communities to create public artwork. She describes her process as “putting a stethoscope onto the community to hear what the heart needs.”

She saw many people engaging with the piece and taking photos to share on social media. Still, the installation was vandalized twice, and Fernandez had to rebuild it completely. At one point, someone taped a piece of paper over it that said Black Lives Matter.

Fernandez took the homemade sign as a pulse of what the community was feeling. Her next piece featured the words BLACK LIVES MATTER written in gold sequins.

“I wanted it to be in this really high reverberating voice in a way that felt joyful, and playful, and that kids could engage with it,” she said.

She reflected on a time when she saw a group of girls standing around the installation, chanting Black Lives Matter. She asked them if they knew what it meant. “Of course!” they replied.

“The way in which race is being observed and valued is really thrilling to me. To add to that conversation is what we need to be doing as artists,” Fernandez said.

That piece was only up for four days before it was dragged onto the beach and thrown into the ocean. A few surfers recovered the remnants and brought them back up to dry land in pieces.

Using the same materials, she created yet another installation, this time featuring just one word: VOTE.

Fernandez is no stranger to political art. Earlier this year, she partnered with Art + Action, an initiative of the 2020 Census.

In collaboration with interdisciplinary artist Arleene Correa Valencia, Fernandez created SOMOS VISIBLES / WE ARE NOT INVISIBLE, a project that reimagines “visibility” for undocumented communities by printing WE ARE NOT INVISIBLE on reflective safety gear typical of labor industries.

In 2015, she led a volunteer effort in Nogales, Sonora, Mexico to “erase” the border fence by painting it sky blue.

A few weeks before the election, the VOTE installation was also vandalized, spray painted red.

Undeterred, Fernandez noticed a new word coming up for her: hope. 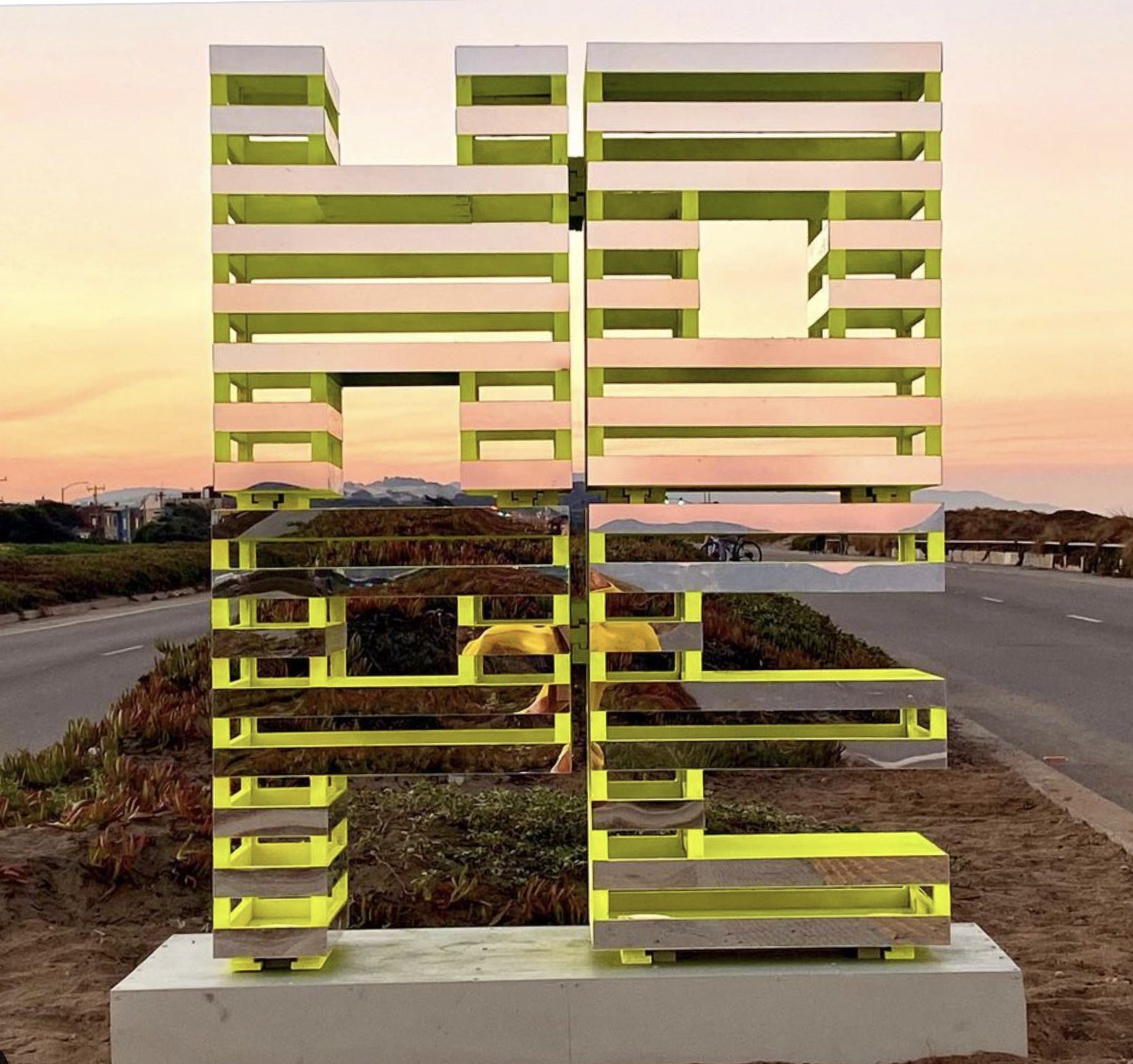 Artwork by Ana Teresa Fernandez was installed on the median of the Upper Great Highway this year after the roadway was closed to vehicles. Courtesy photo.

The letters are built out of mirrored stripes, horizontal lines that leave rows of empty space in between.

“It’s visible and invisible, see-through, because elements of hope need to be filled in,” said Fernandez.

In the absence of museums and town halls, Hodges and Fernandez have reinvented the streets as public galleries and civic spaces. Through the power of visual art, they have brought congressional resolutions to community gardens and rally cries to seaside thoroughfares.

Yet, their work provides no answers. They have simply repositioned borrowed words in new ways and new contexts to make viewers pay attention. The rest is for the observers to fill in.