At some point in the future, once activity limits that were put in place because of the COVID-19 pandemic are loosened, the Saint Ignatius College Preparatory School (SI) will host sporting events on its fields again. If all goes according to plan, students will be able to stay on the field later, thanks to new stadium lights. Many neighbors, however, are not too happy about the new normal coming to their area. 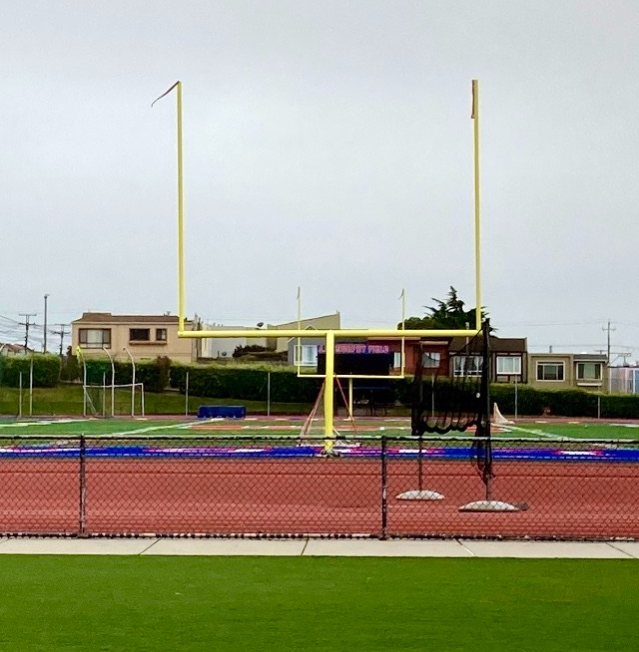 Saint Ignatius College Preparatory School on 37th Avenue at Quintara Street in the Sunset won approval for a plan to add 90-foot-tall stadium light poles to allow later practices and games. Some residents near the school mounted a campaign against the new lights, but their objections were not successful in preventing city approval of the project.  Photo by Michael Durand.

During a contentious Zoom meeting of the San Francisco Planning Commission on July 23, neighbors, students, faculty and alumni all debated whether adding big floodlights 90 feet in the air to make night games longer and safer is a good or bad plan.

Some people at the hearing said the lighting would come at the expense of the folks living around the school, who have to get up the next day and go to work

In the end, the commission in a 6-1 vote sided with SI and granted them a Conditional Use Authorization (CUA) to install four, 90-foot-tall light standards around JB Murphy Field. Commissioner Frank Fung dissented.

The neighbors, led by the citizen group Saint Ignatius Neighborhood Association (SINA), said they have hired a lawyer and are planning to appeal the decision.

According to the San Francisco Planning Department, after installation of the lights the CUA will require that, from Mondays through Thursdays, the lights shall be turned off no later than 9 p.m., for a total of 150 nights per year. For up to 20 nights each year the lights may be on until 10 p.m. Also, the school may not use the lights for events or groups not affiliated with St. Ignatius.

Planning Department staff told the commission the department received 105 letters of support for the lights and nighttime games, as well as 32 letters opposing, mostly from residents of the streets immediately adjacent to the campus who are concerned with impacts from lights, plus increased parking and traffic.

The department also received an o≠nline petition from SINA with 150 signatures opposing the lights.

The school’s principal, Michelle Nevin Levine, argued before the commission that students need more time for athletics after regular school hours, which the new lights would make possible.

“Team sports help to cut down on social media overload and actively ward off anxiety and depression; we know this through research,” Levine said. “Also, it helps them to sleep better.

“We agree with the governor and with educational research that shows that the sleep cycle of our teens requires a later school start,” she said. “So, our teens are going to bed later. The sleep cycle dictates that. They only get 6.4 hours of sleep on average when their developing brains should be getting nine hours. So we want to avoid morning practices, allow for our students to sleep in, come to school later, and we’ll need the field to stay available later into the day.

“Having lights on the field will allow us to shift to a later school start and not put the undue burden on student athletes who have to miss class to attend sporting events.”

Deborah Brown of SINA, however, is also concerned with those living around the school getting proper rest. She told the commission that she represents 165 people in the area who strongly oppose the new field lights.

“For a long time, SI has been able to have a robust sports program without stadium lights. They claim a later start to the school day requires these lights,” Brown said. “How does a 45-minute delay in a start equal sports until 9 or 10 p.m.? SI administration has admitted that the lights would better attract student athletes. That’s just what this is; it’s marketing. It’s a new claim to fame to enhance their exclusive sports school status at the expense of the Sunset neighborhood.”

Brown claimed that on previous nights when temporary stadium lights were brought in for night games it caused a host of problems for the locals.

“The neighbors experienced blaring loudspeakers, broadcast music, thousands of fans, increased traffic, blocked driveways, drinking, litter and public urination,” she said. “Most impactful was the noise. We couldn’t get our children to bed or even hold a conversation in our own homes.”

Maryalice Fischer, an environmental regulatory consultant, brought up the Verizon Wireless gear slated for one of the new towers, which, she said the department should separate from the lighting proposal.

“Verizon doesn’t need a 90-foot pole for their installation,” Fischer said. “And the lighting does not need the wireless installation for that; but both projects use each other to justify both. Further, the school has not conducted needed studies, or requested studies, and Verizon has not evaluated alternate sites, as they should.”

She also claimed a lighting study that was done falls short in some key areas.

“Mostly (regarding) reflected glare from the athletic field and other surfaces that reflect light back up into the air,” she said. “That’s then exacerbated by fog, common in the Outer Sunset. The study also reveals impacts that are greater than what they state.”

Commissioner Fung was also skeptical of the lighting plan.

“The balance between an institutional use and adjacent residential areas is always a very delicate one,” Fung said. “I happen to disagree with the findings in the draft motion that minimize the impacts. I think the impacts are much more significant than that. Therefore I cannot support the conditional use.”

“I believe that the lighting plan is clearly better for SI and its students, as well as the alums,” Diamond said. “The later start time is better for the students and the families to stay closer to campus. The students don’t have to miss the last class of the day because they have to leave early to go to games elsewhere. It builds teamwork, collaboration, a sense of belonging.

“Speaking as the mother of three former teens who are now young adults, it’s better for teens to be at events that are supervised than wandering around the city,” she said. “I believe that the school tried to engineer the lights to be minimally invasive, but I get that for the neighbors this feels like it’s going to have a negative impact.”