Adapting to Change and Surviving the Pandemic: Hockey Haven

“It’s the neighborhood’s place to relax, socialize and decompress,” Erin Massey said. She is the third woman owner of Hockey Haven, an Outer Richmond neighborhood bar. “Our locals are always treated like family. We never just served a drink here and walked away. Not our style,” she said.

Massey and her business partner, Carmel, are in the process of setting up a parklet to pair with their to-go food and drink program.

Business partners Erin and Carmel pose outside of the Hockey Haven on Balboa Street in the Outer Richmond District (pre-pandemic). Courtesy photo.

“The community has been exceptionally supportive and has given us confidence to keep pushing forward,” Massey said. “We couldn’t have this special place without them. It hasn’t been an easy adjustment to figure out all the rules and regulations, but we haven’t given up and want our bar to survive this pandemic.”

Massey said the bar scene was changing even before the coronavirus,.

“A lot of bars that were similar in mentality shut down due to rising landlord costs making way to more expensive type bars,” she said.  “We are not of that mind set and would like to keep our establishment how it’s always been. The formula works. It says it in our motto: ‘Keeping it local since 1949.’”

“We are a legacy bar. There are not many in the city and one of only two in the Richmond District; us and Plough and the Stars,” Massey said.

She summed up the historical narrative she submitted that helped the business achieve legacy status:

“The original owner of the Hockey Haven was a French Canadian who played hockey for the New York Rangers, named Rene Trudell,” she said. “He was married at the time to a woman named Hilda. Together, they owned the bar for 40 years. When his professional hockey career came to an end, he moved to San Francisco and opened the Hockey Haven. Rene Trudell ran the bar, but after a few years he got into a terrible car accident at Devil’s Slide and became a paraplegic. His wife Hilda then took over the bar and owned it until 1989 when Josephine Burns bought the bar. She was a local woman, born and raised just five blocks from the bar. Josephine married a man who was hired as a bartender, John Finlay, who ran the bar with her.”

Massey started working for the previous owners, John and Josephine Finlay, a week after Sept. 11, 2001.

“Josephine always told me that when it became time for them to sell the bar, they would ask me to take over,” Massey said. “After 17 years of managing and tending bar, I was elated to purchase the bar and become the owner. Sadly, Josephine passed away two weeks later from cancer and was never really able to see my dream come true. She was a wonderful woman who taught me a lot about business and even more about life.”

Since purchasing the business, both Massey and her business partner have shown remarkable strength, both surviving their own battles with cancer, and now the challenges caused by restrictions put in place to avoid the spread of the coronavirus.

“We never imagined in 2 1/2 years of owning the bar we would both get breast cancer and deal with a pandemic,” Massey said. “Very frustrating, but we still believe we can get through this and keep the Hockey Haven alive! It’s a part of our lives. It’s not just a job or a business. It’s a special place that we feel happy to keep going and appreciate that our employees also are on board with that same sentiment.

“The first months in quarantine were spent fixing up the bar and signing up for every grant we could find,” Massey said. “We thought we would upgrade, fill out grant apps and wait for the time to reopen thinking that it would be a month or two. When that obviously did not happen, we decided to formulate a plan to open serving drinks and food to go, which is what we were only allowed to do. It was difficult rethinking how to conduct business for the bar since we have been doing business a certain way since 1949. Carmel and I have both worked here since 2001 and for 19 years we ran the bar as a local neighborhood bar without changing much. We wanted it to be a place that provided a hint of the past old school San Francisco.”

Hockey Haven is located at 3625 Balboa St. in the Outer Richmond District. For more information, visit www.hockey-haven.business.site or call (415) 752-4413. 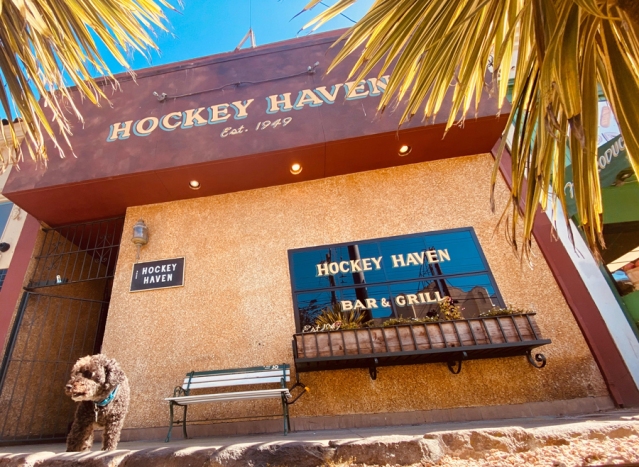