Not a toy. Parked on Taraval near 27th.
Hippie front yard.
Reda Jarrar, the owner of Bill’s Place, promised the previous owner he would keep all the basics of the throwback eatery, carrying on the more than 60-year tradition in the Outer Richmond. Follow link in bio to website for the full story. Photo by Michael Durand. @billsplaceburgers_sf
From our Announcements section in the Sunset Beacon, Richmond Review and RichmondSunsetNews.com.
View from a Southwest flight on May 4, 2022.
Sunset District

A common question asked amongst Star Trek fans is “Who is the better captain, Kirk or Picard?”

It is not a big surprise to learn that the Sunset’s own James T. Kirk prefers his namesake, the original captain of the Starship Enterprise. TV’s James Tiberius Kirk was famously portrayed by William Shatner. 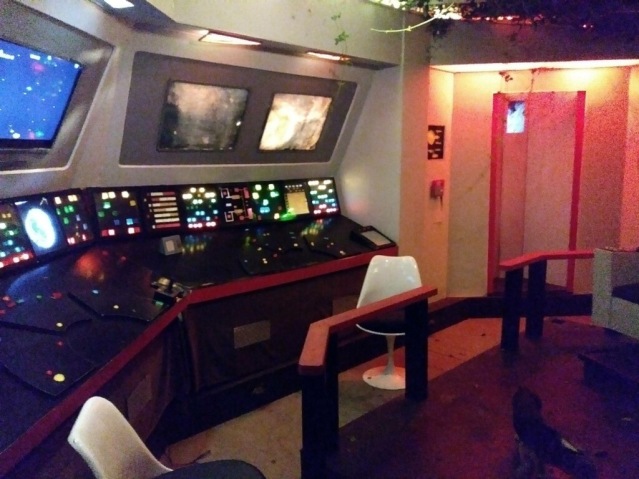 A replica of the bridge on the Starship Enterprise from the television show, Star Trek. The facsimile was built by Outer Sunset native James T. Kirk, who shares his name with the popular captain on the sci-fi show. The room is one of many fanciful creations by the artist and musician. Courtesy photo.

“I just feel like Kirk had the authority, he had the sense of humor, everybody liked him and he was just a really personable character,” the terrestrial Kirk said.

While Kirk shares the name with the character, he does not consider himself a Trekkie.

“I grew up more or less on rock and roll. Some of my greatest teachers were Jim Morrison and Ozzy Osbourne. I’ve been an artist my whole life,” he said.

Kirk’s greatest work of art is undoubtedly his home on 46th Avenue, between Santiago  and Taraval streets, which he proudly refers to as “The Rebel Base.”  The house is a hall of wonders with art and paraphernalia ranging from Star Trek to Star Wars, Egyptian history to AC/DC, and Batman to San Francisco history.

You don’t need an address to find the house; it is the one with the Star Wars rebel flag flying and a large replica of the U.S.S. Enterprise hanging in the upstairs window. Passersby can walk up the driveway to the open garage door and step inside. They are then transported out of the Sunset and into a world where every inch of space is curated to the maker’s liking.

Inside the garage, visitors will be greeted by a coin-operated kids’ ride, a small model of the Batmobile. There is also a replica of Golden Gate Park’s Murphy Windmill, as well as countless sci-fi and comics figurines. If it feels as though you are in a cave, then that is because the ceiling is coated in tin-foil stalactites.

Once visitors have taken everything in from the garage, they move on to the backyard where the main attractions are. The back end of the house features three large installations: a Hawaiian-inspired gazebo, a massive ping pong table and a re-creation of the bridge from the U.S.S. Enterprise.

Kirk’s version of the bridge has brought his house some notoriety. It is a faithful rendition of what is seen on the original Star Trek television show. The room is built out of plywood, PVC pipe, styrofoam and various other household materials.

“I built the entire place with my two hands,” Kirk said with pride.

All of this labor begs the question, “Why?”

“The motivation behind it is having an open door, being welcoming to people and giving them a feeling of being welcome,” Kirk said. Then adds, with a grin, “and a place where I can show off all of my wares.”

Born in 1966, Kirk has been a resident of the Sunset his whole life. He reflects on some of the changes in the community.

“Back in the ’80s, there were a lot of doors and garage doors open, there was a real sense of community and people were a lot more welcoming. Now people have iron gates up and there’s a lot of fear, and that’s something we just don’t need to live with.”

Kirk wants to give back to his community by providing a place for his neighbors to interact and have fun.

“It is a piece of art. It’s a museum.It’s a community center. I like to think that it portrays freedom.”

Kirk is planning on setting up a GoFundMe page to save his home/art installation. He does have an Instagram page where he posts snapshots and the goings-on of the house. The handle is @therealjamestkirk.