Work Begins on New Traffic Route in Golden Gate Park
Sunset Beacon fan and our neighbor today at the “Meet the Editor of the Sunset Beacon” session at the Outer Sunset Farmers Market was Niamh. “It’s pronounced like Eve, but with an ‘N,’” she said. A delightful Irish lass, Niamh creates lovely contemporary jewelry using porcelain. Go to niamhco.com to learn more, and follow her on Instagram @niamh.co
Skatin’ Place.
We live in such a beautiful city.
The Conservatory of Flowers in Golden Gate Park is expecting another corpse flower bloom soon. When fully open, the Amorphophallus Titanum emits the odor of rotting flesh to attract pollinators. The bloom is huge! Follow the link in bio to our website and search “corpse” to read Erin Bank’s great story about the previous bloom.
Faith Community

Star of the Sea School to Close for Curriculum Realignment

Classes at Star of the Sea, a Catholic elementary school on Ninth Avenue at Geary Boulevard, in the heart of the Richmond District, will be suspended at the end of the school year in June due to declining enrollment. The preschool will remain open.

Classes are on hold for the next school year while they develop an “Integrated Classical Program,” focusing on developing a curriculum, marketing strategy and effective business model, according to a statement issued by the pastor, Fr. Joseph Illo. 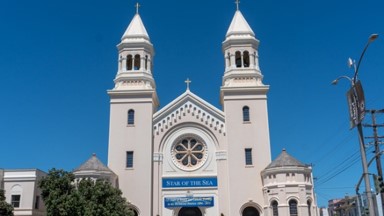 Star of the Sea Church in the Richmond District is postponing classes for its elementary school as it revamps is curriculum. Photo by Gui Oliveira.

“Star of the Sea parish and school have done everything possible to maintain classes uninterrupted during this time of transition into an Integrated classical program,” Fr. Illo said in a statement released to the press. “Due to unforeseen challenges, however, we now see that it is wiser to take additional time to properly study, design, market and fund this new model. We regret that we must suspend classes because of projected low enrollment for the upcoming school year.

“This has been a difficult and uncertain period for many school parents, some of whom have strongly expressed their concerns and reluctance to this development. There has also been a good deal of positive interest in moving forward with this new model. I am looking forward to working with people who are eager to develop this kind of school in San Francisco. I am most grateful to our faculty and staff, who have been working so hard along with parish staff to develop the integrated classical program.”

According to the San Francisco Examiner, the 110-year-old Catholic elementary school will terminate all school positions, which include 11 teachers and five part-time faculty. The school is reported to have had 220 students enrolled in the 2017-18 school year, however, only 50 students committed to re-enrolling for the 2019-18 school year.

Fr. Illo was appointed as pastor in 2014 and soon began to implement more conservative policies at the school, like reversing a policy which allowed girls to serve at the altar during mass in 2015.

More recently, tensions came to a head at a March 7 meeting with parents, the school principal, some faculty and Fr. Illo during which heated exchanges led to some parents walking out, according to the National Catholic Reporter. On March 11, a 1,200-word complaint was filed with the San Francisco Archdiocese’s vicar for clergy asking for an investigation of Illo’s behavior at the meeting.

A spokesperson for the diocese, Mike Brown, blamed the root of the issue on philosophical differences.

“(Fr. Illo) believes very strongly that that kind of a classical liberal arts and Catholic education is the right model,” Brown said. “Who can say why individual parents have pulled their kids out? Some have said that they don’t know enough about that kind of education model. Others have told Fr. Illo they don’t really want a ‘parish school.’ They want a school. Those are philosophical differences that are hard to reconcile. He believes very strongly that a school within a parish is a parish school.”

According to media reports, some of the parents are also concerned with Fr. Illo’s leadership, but Brown said the diocese is not considering removing or replacing him.

“Parents complaining about pastors and schools does not qualify as a reason to consider moving the pastor,” Brown said.

This is not the first church that Fr. Illo has had complaints from parents.

The Examiner reported that when an old court case came to light from another church he previously served at, it caused some parents to call for his removal.

A civil case was settled in San Joaquin County Superior Court in 2005, and found that Fr. Illo “inflicted emotional distress on an 11-year-old girl” while at St. Joseph’s Parish in Modesto. The girl reportedly had gone to the rectory and made allegations of sexual misconduct by another priest working under Illo. The lawsuit claimed that Illo called the girl a liar and yelled at her, causing her emotional distress. She was ultimately awarded $20,000 in damages.

But Brown said Fr. Illo was not removed or forced out of that parish; instead he voluntarily left there and chose to transfer to Star of the Sea.

“It was his choice,” Brown said. “He was ordained a priest in Modesto…. He asked for permission to move to the archdiocese of San Francisco.”

Tagged as: school, star of the sea