Work Begins on New Traffic Route in Golden Gate Park
Sunset Beacon fan and our neighbor today at the “Meet the Editor of the Sunset Beacon” session at the Outer Sunset Farmers Market was Niamh. “It’s pronounced like Eve, but with an ‘N,’” she said. A delightful Irish lass, Niamh creates lovely contemporary jewelry using porcelain. Go to niamhco.com to learn more, and follow her on Instagram @niamh.co
Skatin’ Place.
We live in such a beautiful city.
The Conservatory of Flowers in Golden Gate Park is expecting another corpse flower bloom soon. When fully open, the Amorphophallus Titanum emits the odor of rotting flesh to attract pollinators. The bloom is huge! Follow the link in bio to our website and search “corpse” to read Erin Bank’s great story about the previous bloom.
A.P. Giannini Middle School

Plans for rebuilding the A.P. Giannini Middle School are getting underway, using bond money and a state grant to modernize and upgrade the two-story, 160,882-square-foot building that sits at the corner of Ortega Street and 37th Avenue. 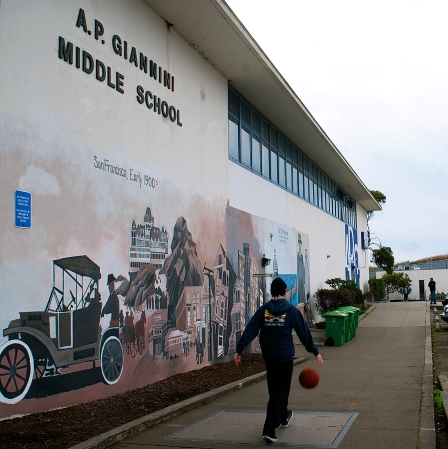 A student bounces a ball while walking on the A.P. Giannini Middle School campus. The school is slated to get a $31.7 million upgrade. Photo by Thomas K. Pendergast.

According to Laura Dudnick, the public relations manager of the SF Unified School District (SFUSD), the project is currently in the design and development phase. It has an estimated cost of $31.7 million, of which $27 million would be provided by Proposition A bond funds and $4 million would come from a one-time grant from the state.

The scope of work under the bond includes modernizing classrooms and renovating the cafeteria and library, redesigning the administrative offices and the school’s front entry, modernizing the kitchen, improvements to the building and security system and a variety of other interior repairs.

The scope of work under the state’s one-time grant includes repairing the building’s exterior and repainting it, improving the lighting and various updates to the school’s locker room, gymnasium and auditorium.

Construction for the project is estimated to take 26 to 30 months, and could begin as early as April of 2020.

A.P. Giannini Middle School is named after Amadeo Pietro Giannini, the son of Italian immigrants who is best known for lending money or extending credit to both individuals and businesses in the aftermath of the 1906 San Francisco earthquake. That tremblor was estimated to be a 7.8 or 7.9 on the Richter Scale.

Not only were many buildings flattened outright, but broken gas mains created numerous fires and broken water lines made it impossible for the SF Fire Department to get enough water to fight them. The ensuing inferno spread to complete the destruction of about 500 blocks throughout the City, mostly between the Embarcadero and Van Ness Avenue.

After Giannini felt the initial shock and subsequent earthquake, he headed for his bank, at the time called the Bank of Italy, which was located in the North Beach neighborhood. When he got there he loaded millions of dollars in cash, silver and gold onto a produce wagon, covered it all with vegetables and got it out of the building before the fire destroyed it.

When the fire ended, he set up a makeshift bank using planks and barrels for counters, then began accepting deposits and giving out loans and credit to people hoping to rebuild the City.

Because he was most likely the only banker with resources after the catastrophe, he was responsible for bankrolling much of the early recovery efforts. But this was not his only claim to fame.

He would later purchase the Bank of America in 1919 and merge it with the Bank of Italy, creating one of todays largest banks in the world. He also founded the Transamerica Corporation, helped establish the California wine industry and bankrolled Hollywood when the movie industry was just getting started.

In 1923, he created a motion picture loan division at the Bank of America and gave money to Mary Pickford, Charlie Chaplin, Douglas Fairbanks and D.W. Griffith to start United Artists. Giannini also loaned Walt Disney money to finish the movie “Snow White” when it went $2 million over budget.

The Bank of America also financed the building of the Golden Gate Bridge. In the middle of the Great Depression, no other bank would put up the money for it, so Giannini got things going by buying $6 million worth of bonds. He eventually purchased all of the bonds that contributed to building the $35 million, 4,200-footlong suspension bridge. 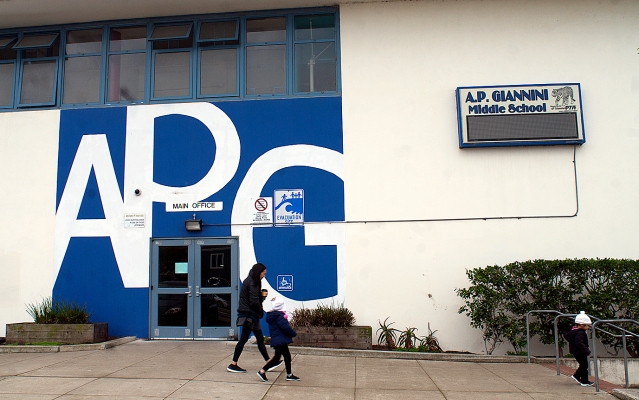