Nora Bruhn, co owner of the community space Work in Progress, located at 4752 California St. at 10th Ave.
From the Outer Sunset Farmers Market celebration of the new Chinese Cultural District in the Sunset. Sunday, May 22, 2022.
On Sunset Boulevard at Rivera Street. Sunday, May 22, 2022.
A statue dedicated to Saint Francis of Assisi, the namesake of San Francisco, stands in a bucolic setting in the Garden of Fragrance in Golden Gate Park’s Botanical Garden. Photo by Eloise Kelsey.
Sunset Resident Paints Pysanky, Ukrainian Easter Eggs
UC San Francisco has received approval for its plans to build a state-of-the-art hospital at UCSF Helen Diller Medical Center at Parnassus Heights to meet the region’s growing demand for specialty care and California’s rigorous hospital seismic requirements. (Follow link in bio to our website to read the press release.)
housing

For 30 years, Pik Yuen Leung and Kwong Lun Leung have called their in-law unit at 332 29th Ave. home, but at the end of October they must leave their small yet comfortable residence because they are being evicted under the statewide Ellis Act.

So now, she and her son will join a growing list of long-time San Francisco residents facing possible homelessness under the law. City records show a significant increase in Ellis Act evictions during the last couple of years, including within the Richmond and Sunset districts. 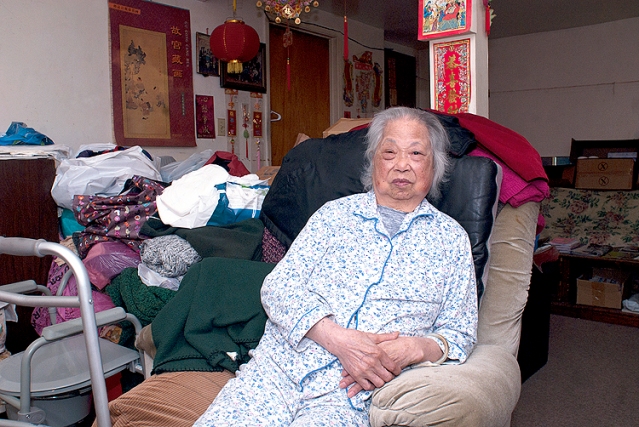 Speaking through a Cantonese interpreter, the 88-year-old immigrant from Hong Kong said she moved there in 1988, and now shares the apartment with her 64-year-old son, Kwong, who is essentially her caretaker.

She said that although it is a small place, she is happy there and until recently has not had any problems. Kwong said the previous landlord told her he got a promise from the new owner that she would be able to spend the rest of her days there, although the promise was verbal and nothing was put in writing.

She has four other children, all of whom live in San Francisco except one, who lives in Burlingame. And she has eight grandchildren. Yet for a variety of reasons, such as tenancy and lease restrictions, she does not think it is likely that any of them will be able to take her in to live with them.

About a month after the sale, the Leungs got their first eviction notice. Normally, these notices give the tenant 120 days to vacate, but San Francisco law makes more time available for elderly and disabled people who file for extensions.

Since then, Pik Leung has had a stroke, was hospitalized for a while, then fell and broke her hip, so now her mobility is limited and she uses a walker. The Leungs have also been served with a new eviction notice under the Ellis Act, and have until the end of the month to move.

The Leungs said the new landlord offered them $16,000 to move, and they are applying for affordable senior housing, but they doubt this money will last long in today’s rental market where even small places like theirs are charging thousands a month. Their current rent is $740 per month.

“Even if I got $60,000 it wouldn’t matter,” Pik Leung said. “Where would I rent and who would rent to me? That money will last you barely any time.”

She is worried that she will face discrimination in finding a new place because of her age. The family has never met the new landlords and have only dealt with their attorney. The eviction notice was issued on behalf of the property owners, listed as Frederick Ty and Leona Sy. Attempts to contact both for inclusion or comment on this article were not successful. A voice-mail message was left requesting comment from their attorney, Jamie Bombard, but she did not respond by press time.

Cynthia Fong, a community organizer at the tenant advocacy and counseling group Housing Rights Committee of San Francisco, said owner move-in (OMI) evictions were more prevalent when legislation toughening up reporting requirements for OMIs was passed in July of 2017, but since then there has been a noticeable decline in those types of evictions, while concurrently Ellis Act evictions have increased.

“Part of that is because enforcement around the Ellis Act is still not fully there with the City,” said Fong. “A lot of the things that the City would need to do to keep track of Ellis Acts, similar to the (OMI) legislation, would be to require landlords to provide more reporting and more information, especially about the tenants. (Ellis Act evictions are) sort of the easier thing to get away with now.”

Statistics from the San Francisco Rent Stabilization and Arbitration Board’s annual eviction notice report appear to support her statement. From March of 2016 through February of 2017, there were 127 Ellis Act evictions throughout the City, and 397 OMIs. From March of 2017 to February of 2018, however, the report shows 201 Ellis Act evictions and 297 OMIs.

Fernando Marti, co-director of the Council of Community Housing Organizations, has a theory.

“I think that you’re seeing a move out into the avenues as our more accessible neighborhoods, like the Mission and Hayes Valley, become quite gentrified. So, whether it’s speculators or simply just actual buyers, they start to look into the next neighborhoods out,” Marti said.

“When they do an Ellis Act it means that they are not going to rent out. It doesn’t say anything about reselling as a Tenancy In Common (TIC) or just reselling as a condominium.

“And then nobody’s tracking if they actually do a renovation and then re-rent, it’s sort of up to the neighbors or the former tenant to go back and check to see that they’re actually not violating the law and re-renting, that they didn’t lie,” Marti said.

Pik and Kwong Leung understand and acknowledge that they are up against the Ellis Act, so ultimately they have no choice but to move. But as difficult as it is to find affordable housing, they are asking for more time.