Check out the new restaurant in Laurel Village — Proposition Chicken — offering a variety of ways to enjoy chicken, salads and more. Tell them the Richmond Review sent you!
Snow in Golden Gate Park, part of a celebration of the holiday season on Thursday, Dec. 2, 2021.
A recent westerly view down Vicente Street at sunset looks like a John Musgrove painting.
A tale of two neighborhoods
Parkside Christmas tree. 24th near Taraval.
Parkside craftsman.
History

Woman Pens 2 Books Due to Love of History, Neighborhoods

“I was experiencing the ‘empty nest syndrome’ with my son having left for college. In addition, I was suffering anguish as a result of 9-1-1,” she said, “I needed something to dig into that would distract me.” 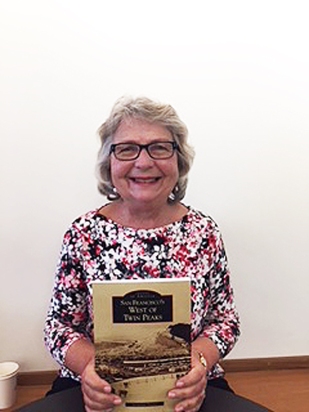 Jacqueline Proctor holds up a
book of history about the
West of Twin Peaks. Courtesy photo.

Proctor found the very thing –researching and writing about her family’s history. She traced her lineage back to County Armagh, Ireland, to her great-great-great grandfather, James M. Liggett.

Her family’s story is classic American pioneer: Liggett landed in Philadelphia as an indentured weaver and later moved westward to homestead in Nebraska. His grandson migrated to California.

“I derived many benefits researching and writing about the Liggetts,” Proctor said. “I had the pleasure of getting to know members of my extended family here and in Ireland.”

For her next writing project, she tackled her neighborhood, the West of Twin Peaks.

“When I visited San Francisco as a child, I fell in love with the city’s architecture and natural land preserves,” Proctor said. “When I completed my family’s genealogy, I began to seriously explore the West of Twin Peak’s history.”

She learned how the area first developed after the boring of the streetcar tunnel through Twin Peaks in 1918. The tunnel opened up the land around Mt. Davidson, the city’s tallest hill at 928 feet, for development.

The architects added lush landscaping, decorative street furniture, gateways and staircases to the “residential parks.” In “San Francisco: West of Twin Peaks,” published in 2006, Proctor lays out the rich history of these neighborhoods with many historic pictures.

“My publisher wanted 200 photos and the library charged $50 a photo, so I asked friends from the Mount Davidson Conservancy for their families’ pictures,” said Proctor, a cofounder of the organization. “I met such wonderful neighbors.”

Proctor had a long time to get to know her neighborhood before she started writing about it. She and her husband, Ron, bought a house in Miraloma Park in 1980. She then began to explore Mt. Davidson and surrounding environs.

“I can see the Mt. Davidson Cross from my living room window and the east and south bays from our rear yard deck. It’s only a 15-minute walk up to the park. Our son played there as a little boy,” she said.

The Proctor’s were attracted to Miraloma Park because of its affordability. They grew up in the suburbs so they liked that their house had space for front and rear gardens as well as a garage.

“Our two-bedroom house has a Colonial Revival design,” Proctor said. “With friendly neighbors, convenient shopping and spectacular views, the location is ideal.”

Proctor graduated from San Diego State University with a degree in social welfare but found that working with troubled youth was not her bailiwick. However, through her studies and the influences of writer and community activist Saul Alinsky, she became very interested in social change.

Deciding on a career in public administration, she obtained her master ’s degree in 1977 from what is now California State University, East Bay, and started working for Hayward’s city government.

Throughout her 30-year-long career, she discovered writing was what held her interest.

After the publication of “San Francisco’s West of Twin Peaks,” she was contacted by the great-granddaughter of Harold G. Stoner, an architect of many of the homes in the area. The result was “Bay Area Beauty; The Artistry of Harold G. Stoner, Architect,” published in 2011.

Delving into architectural history sparked an interest in volunteering for San Francisco City Guides, where she led Bay Area residents and visitors on free walking tours of the Financial District, Chinatown and South of Market. She even created her own tour, the “West Side Whimsy Walk” encompassing the areas West of Twin Peaks.