Apparently, some people think the entrance to Golden Gate Park at the intersection of Ninth Avenue and Lincoln Way needs a major makeover, so the City recently presented two “schemes” for sprucing it up.

At a community meeting held in June at the San Francisco County Fair Building, representatives from the San Francisco Department of Public Works (DPW) presented two concepts for revamping the intersection, along with plans to add a block of Ninth Avenue, between Lincoln Way and Irving Street, into the project. 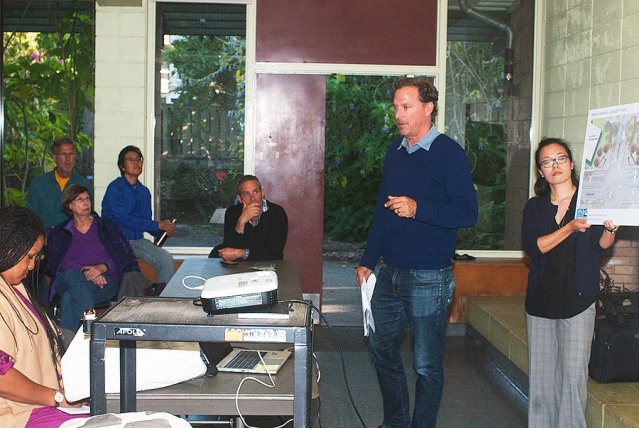 The department’s project manager, Mike Rieger, started the meeting by noting that at this time they have funding for designing the project, but no money yet for construction.

Nicholas A. Ancel, a landscape architect working on the project, supports a change at the intersection, saying “there’s no there, there.”

The department is considering two schemes: a more traditional landing area, or a “classical homestead” design, versus a more modern “linear landing” design.

Ancel said the two schemes are different in terms of concept, space and materials but they also have similarities: they are both symmetrical around the entryway into the park; both create level landings there; both provide seating on low walls; both improve “way-finding” for orienting tourists to where things are in the park; both provide entry signs; and, both involve new plants.

As for differences, he said, the traditional design is more pastoral, using curving lines and pathways with undulating topography.

It would have pre-cast concrete walls to create the edge of a plaza area and a central planter.

“In this scheme we’re talking about using native plants throughout the project,” he said.

Ancel also elaborated on the idea of using “pre-cast” concrete walls and how they fit into the scheme.

“These are durable. We can change the shape of them and the size of them so that they can be used for informal seating,” he said. “We don’t want people to be able to stay here for long periods of time. Everybody knows the issues, the social issues that we have in San Francisco. But we want to have the ability for people to perch and stay.”

The linear landing scheme, on the other hand, is modern looking, more axial and angular.

“We think it has more to do with the heart of the park around the new projects that are on either side of the Music Concourse now, the de Young and the Academy of Sciences,” he said.

“This is a very simple, elegant scheme. It’s essentially two walls: a short lower wall and a longer wall.

“What these walls do is they help funnel you into the park. And they also give us the ability to do the grading to create a level landing at the entrance to give people a moment to collect their thoughts, to move the baby carriages out of the way and let people who know where they’re going. It creates a flatter spot so people can take a break.”

The scheme also includes etched granite in the paving to act as a way-finding element of the park. In this scheme they would not be limited to native plants but would instead opt more for what Ancel called “climate adapted” plants, which come from around the world but can adapt to the local climate.

As for Ninth Avenue, the proposed changes primarily involve things like pedestrian lighting, the installation of plaques embedded in the sidewalk to put historical context in the neighborhood by noting things that have happened inside the park in the past, along with new planters and additional street trees.

At least one local resident, Harry Pariser, was not pleased with either scheme, opining that the de Young and the Academy of Sciences have nothing to do with the Inner Sunset neighborhood and expressing concern that the proposed gateway would turn Ninth Avenue between Irving Street and Lincoln Way “into a theme park.”

“I think this sort of commodification or Disneyfication of the City is wrong,” Pariser said. “How much outreach has been done and what is this project going to cost, especially the element on Ninth Avenue?”

As for the cost of construction, Rieger said the estimate is currently between $1 million and $2 million.

“This is not really considered a large project,” he said. “But, it’s very impactful and beneficial for the community.”

Local resident Lilian Stielstra, however, did not seem entirely convinced of the benefit.

“I use this park five days a week. And, very frankly, I much prefer the ‘wild west,’ untouched, un-urban, simple,” Stielstra said. “It’s a place to get away from the urbanness of the City. The more you try to stylize it … it just detracts. The concept and design of the park 150 years ago is that this is a respite.”

Another local resident, Carla McKay, expressed support for the concept.

“I live in the Inner Sunset and I run in the park almost every day, and I can’t tell you how frustrated I am with the current opening,” McKay said. “I love these designs. This is so long overdue. Whenever I go into the park that way I’m asked a question about ‘where am I going?’ ‘How do I get there?’

“I walked my mother in that entrance the other day. A baby carriage ran into her. It’s long overdue.”