covered in 24-carat gold leaf. While many local residents know about the iconic

landmark, few know about the school tucked away underneath the house of worship:

With 53 students, classroom sizes are intimate. Serving students from kindergarten

through 12th grade, teachers usually have only four children per class. 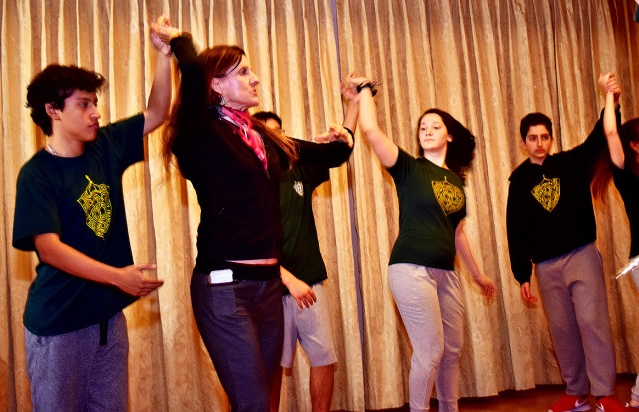 “We follow a classical model of education,” said Mary Najjarian, serving in her

fifth year as principal at St. John. “In addition to English, science, history and math, our

About 90 percent of the students speak a language other than English at home,

with about half speaking Russian. Many students enter kindergarten not speaking

English at all, so they are taught English through an intensive immersion program.

not just competent but fluent and poetic,” Najjarian said.

The school was named for St. John of Shanghai and San Francisco, a bishop in

Shanghai who came to the United States and brought an orphanage from China.

St. John oversaw the building of the cathedral, which was completed in 1965.

Before officially becoming an accredited school in 1994, St. John was a homeschool

cooperative started by Father Sergey Kotar and his wife, Maria. Families came together

“Community is very important to us,” Najjarian said. “As a small school, we

have a unique opportunity to really know each other. We have created an environment

out. We have a buddy system between kindergarten and middle school. Their older

about themselves and more about what other people need.

are involved with a grocery delivery program for elderly people with low incomes.

Once a week, even during the summer, the food bank delivers pallets of food, then our

students organize everything and fill bags with food to be delivered,” Najjarian said.

hands-on training. It is a chance for urban kids to get physically engaged in the outside

world. Each year there is a new theme. This year the theme is ceramics. The students

learn about the history of ceramics then get to throw pots and create their own art.

and is currently in ninth grade.

“My husband tells people who are interested in attending the school: ‘It’s a

hidden treasure that you’re lucky to find,’” Musleh said. “As a parent, I am very happy

with the school academically. Part of what keeps me content is that I love the atmosphere

of a family. It’s a community. Everyone helps each other. Everyone eats together.

place where you want your kids to go. They feel safe,” Musleh said.

The school’s goal is to add a few more students.

“For those interested in finding out more about the school,” Najjarian said,

“the best thing you can do is visit. Our environment is hard to capture in words.

For more information, go to the website at http://www.stjohnsacademysf.org/home