Now this is impressive. If you haven’t tried Angelina’s yet, go! They have great food and a friendly staff. A Richmond District classic.
We are updating the lists of where you can find our newspapers. Here’s where you can find the Richmond Review at the Arguello Market
Art at Outside Lands 2022
Go to RichmondSunsetNews.com to fill out the ballot.
Kirkham Street and 37th Avenue. Aug. 5, 2022.
Aww, thanks One Richmond!
Richmond District

For the past 18 years, Golden Gate Park Band director Michael L. Wirgler has

waved his baton, leading the band to rousing renditions of a wide

variety of music. On Sunday, Oct. 8, he will be handing over his baton

and taking his final bow with the band before retiring.

The Golden Gate Park Band has

played a broad range of music over

the years, including classical

selections, operas and marches. In

addition, a number of the concerts

groups from throughout the

Wirgler has been band’s conductor

a member of the band for 25 years. He retired after a 33-year career as a music teacher.

The Golden Gate Park Band concert on Oct. 8, a free all-request affair, will be

For more information, go to the website at http://www.GoldenGateParkBand.org.

play baseball in the major leagues. 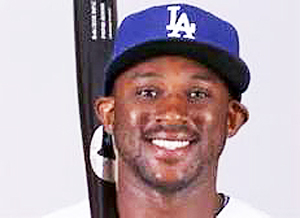 He made his major league debut the next day, starting the first game of a doubleheader

in left field for the Los Angeles Dodgers.

After his first three games in the majors, he was posting a .333 on-base percentage,

but the big deal came on Sept. 23, when Dickson got his first big league hit, off SF Giant’s

pitcher Madison Bumgarner. As is the custom of Major League Base ball, the ball was

retrieved for the rookie’s keepsake.

Dickson was a four-year starter for the Eagles’ varsity baseball team, participating

in four city championship games. The team won it all in 2006, with Dickson being

in AAA history,” according to Washington baseball coach Brian Jesson.

“During the 2006 championship game, O’Koyea hit a double and a home run into

Washington, and in 2008 he was named Player of the Year. He attended the

round of the 2011 Major League Baseball draft.

with a .349 on-base percentage and .491 slugging percentage.

major leagues. White was drafted by the Montreal Expos in 1970, making his major

league debut with the team, and also playing with the Chicago Cubs and St.

Louis Cardinals. White spent 15 years as a coach for the Minnesota Twins.

a block party, according to the Neighborfest Program.

them to pull off “the best block party their neighbors have ever attended.”

residents. It is Neighborfest’s goal to have a stronger, more connected community.

This year, with the support of many city departments and the offices of SF

Network (NEN) has more than 35 groups participating in street festivals, including two in

the Richmond in October. They are on Saturday, Oct. 14, on 20th Avenue, between

between California and Lake streets, from 1 to 7 p.m.

For more information about NEN, go to the website at http://www.empowersf.org.

Uber Technologies Inc.’s self-driving car program has had its first reported crash in

According to the SF Examiner, one of Uber’s autonomous Volvo XC90s was

driver disengaged its self-driving technology to allow pedestrians to cross.

since Uber got its permit to test autonomous vehicles in the state.

Grocery Outlet, located at 6333 Geary Blvd., contributed a portion of its sales recently as

a fundraiser for the Golden Gate Senior Center.

Through donations, the store amassed 250 bags of groceries for seniors, as well

as raising $6,422. The money will be used by the non-profit senior center, located

at Geary Boulevard and 26th Avenue, to launch its “wellness program to promote

“This week we started an Always Active exercise program, and we are taking

57 seniors on a trip to have lunch at the Japanese Tea Garden in San Mateo,”

said Kaleda Walling, director of the Golden Gate Senior Center. “These are

Grocery Outlet has made possible.”

Sonic, an Internet provider that has been working for the past several years

laying high-speed cable in the Richmond, is giving back to the community through

On Thursday, Oct. 5, Sonic employees will lead a community clean-up of

Additionally, for every resident that signs up for service at a Sonic event, the

The SF Recreation and Park Department announced in September the