More reasons why we love our job. Many of the subjects of our feature stories are so thrilled to be in the local paper they put the paper up in their store window. And, when we walk by and see it, we’re also thrilled! Thank you, Young Artist Studio!
Work Begins on New Traffic Route in Golden Gate Park
Sunset Beacon fan and our neighbor today at the “Meet the Editor of the Sunset Beacon” session at the Outer Sunset Farmers Market was Niamh. “It’s pronounced like Eve, but with an ‘N,’” she said. A delightful Irish lass, Niamh creates lovely contemporary jewelry using porcelain. Go to niamhco.com to learn more, and follow her on Instagram @niamh.co
Skatin’ Place.
We live in such a beautiful city.
Art

Moviegoers sit in the darkness of a theater not knowing what to expect. However, the

only risk is maybe they will not care for the film. They can see the “exit” signs from their

Kim Chambers enters the darkness of the ocean in the dead of night, wearing just a

swimsuit, cap and goggles, unprotected from the punishing, choppy, cold water. She may

be torn apart in a matter of seconds by sharks. It’s a given that she will be stung by

dozens, if not hundreds, of jellyfish. No matter how prepared, fit and seasoned she is, her

body may not be able to survive the elements. Yet she persists. One stroke at a time. 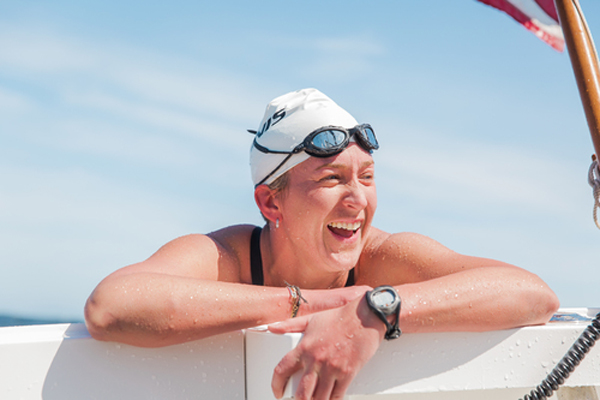 Long-distance swimmer Kim Chambers was the first woman to swim from the Farallon Islands to the Golden Gate Bridge. (Courtesy photos.)

new documentary, “Kim Swims,” which is getting its world premiere at the 40th annual

“Kim Swims,” an inspirational story by first-time director Kate Webber, is more about the

personal challenge and joy of the journey, rather than the end-all and be-all of the finish.

Connecticut-born Webber is from a family of swimmers, so she was naturally drawn to

her subject. The accomplished still photographer, who lives in the Richmond District,

wanted to take her artistic eye and storytelling style to the next level.

Dolphin Club (based at Aquatic Park).

Gate Bridge. Many consider it the toughest marathon swim in the world because sharks

are known to surround the wildlife preserve, and the water is super cold and has a

Only four men have completed the swim.

world. Chambers is one of the few women to tackle the Oceans 7 Challenge, which took

her all over the globe. But, one of the swims almost killed her.

While few can relate to what an extraordinary athlete Chambers is, the themes of “Kim

Swims” are relatable. A freak accident left the former dancer with almost no chance of

walking again. But, she knew differently and spent two years rehabbing her leg. She

could walk, but not run, so out of frustration she started swimming in a pool.

After someone suggested she try swimming in the Bay, she got in, and that was it.

“I loved it,” she says in the film. “Everything ignited in me. It’s the great unknown. That

experience with nature, it just fed my soul.”

Webber approached Chambers two years ago about telling her story. Webber wanted to

challenge herself, entering the unknown artistically.

The crew that spent 30 hours documenting Kim Chamber’s historic swim were Patrick Shaffer, who did sound (left to right), cinematographer David Orr and Richmond District resident Kate
Webber, who is the director of “Kim Swims.”

“Life is short,” says Webber. “There was more growing I wanted to do.”

swam from evening to the next day. Webber ’s tight-knit film crew was in the boat,

Right before the swim, Chambers talked calmly, yet seriously to her crew. She took off

her watch and told them that she did not want to know how many hours would pass, or

how many miles there was to go. It was a total surrender to nature and fate, as she

describes in the film.

Webber wanted to capture Chambers’ “personal quest,” but she also had her own.

“I wanted to bring my storytelling to a larger audience,” Webber said. “My hope is that

the film will inspire people to push past fear. For me, doing this film is like jumping into

the Farallones at night.”

For more information, go to the website at http://www.mvff.com.