and Masonic Avenue, with the Best Buy store moving out in October and three new

buildings coming to the site next year. 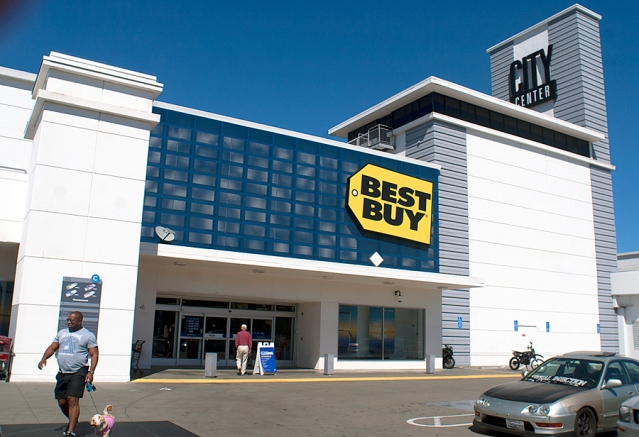 The Best Buy at the City Center, located at Geary and Masonic, is closing. Photo by Thomas K. Pendergast.

Although the location, at one of the busiest intersections in the City, might appear to be a

highly profitable one, it seems this was not the case for Best Buy. For them, the space

within the building turned out to be problematic.

“It’s never an easy decision to not renew a store lease. This was a business decision and

not a reflection on our staff or the hard work they have done,” Boua Xiong, a

spokesperson for Best Buy, said in a written statement. “We know our customers want an

easy and memorable shopping experience. However, the store’s high cost of rent and its

no matter how much we tried.”

“Instead of renewing this lease, we have made significant investments to nearby stores,

including our Harrison Street location and our Colma store,” she said. “These two

locations, and our 18 other big box stores in the San Francisco area, will continue

to serve our customers. In fact, many residents in the Bay Area will still live within seven

miles of a Best Buy store, and customers can also be served through http://www.Bestbuy.com.”

Christopher Conlon, the chief operating officer for the property management company at

the City Center, Acadia Realty Trust, confirmed that Best Buy “never quite did well” in

that space. Although no decision has been made on a new tenant for the center, it is

getting plenty of inquiries, Conlon said. “We are overwhelmed by the positive interest in

this space,” he said. “There’s been a  broad range of retailers that have responded. Some

of them only want some of the space  but not all. Right now, we’re fielding about 12

different businesses that are considering it.”

Complicating matters, however, are plans to construct three more buildings on the

property, starting next year. Plans for construction are now being reviewed

by the Planning Department.

According to the Planning Department, the proposed project on the 6.6-acre site would

include the construction of one- and two-story horizontal additions, totaling

building in parking Lot D, which sits at the very top of the shopping center. 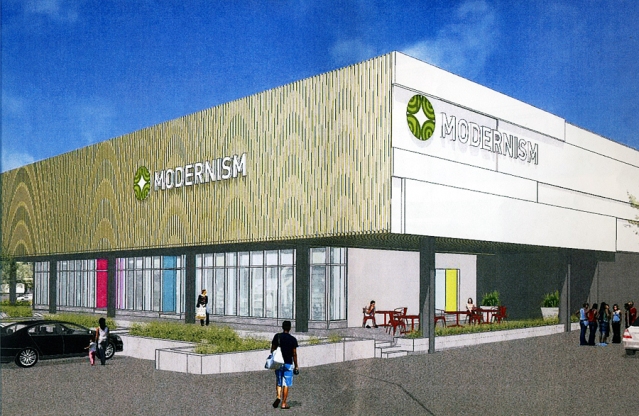 An artist’s rendition of the proposed two-story building to be constructed at Lot F. (Courtesy graphic.)

in parking Lot F, and a new one-story retail building, totaling 3,608 square feet, will be

built on the northeast corner of Masonic Avenue and O’Farrell Street, in parking Lot A.

Furthermore, the project proposes to expand parking Lot B by constructing an elevated

plus another three in parking Lot E. It would be set back approximately 25 feet from the

O’Farrell lot line, with a solid waste enclosure and a loading space screened by

a large landscaped buffer, plus an outdoor seating area located along the street’s edge.

Boulevard, a route currently used by many neighborhood residents seeking a short cut

through the parking area to the bus stop on Geary, according to documents filed

with the Planning Department.

The new building proposed for parking Lot A will replace 19 surface parking spaces.

The expansion of parking Lot B, with its elevated parking deck, will increase the number

floor of the main retail building currently occupied by a Target store.

parking levels. As a result of the proposed conversion of parking spaces to

retail space, the amount of off street parking would be reduced to 634 spaces. The total

parking spaces. As such, the Planned Unit Development (PUD) process pursuant to

to the off-street parking requirement.

up to 23, in secure, weather-protected bicycle lockers, plus an additional 66 bicycle

parking spaces will be added along Masonic and O’Farrell sidewalks.

A dozen new street trees will also be planted along O’Farrell Street. Conlon said they are

still in the process of getting all of the necessary permits, but they will not begin

construction until after the holiday season in order to avoid negatively affecting tenants.

At this time, the City Center is not releasing figures for how much the project will cost.