Viewers had a wide range of emotional reactions – from exuberance, awe and pride to melancholy feelings of nostalgia – on June 18, opening day of the Northern California stop of the Obama Portraits Tour, being exhibited through Aug. 14, at San Francisco’s de Young Museum. (Follow the link in bio to RichmondSunsetNews.com to read the full story.)
Thank you to OneRichmond for your great support. Note: the monthly Meet the Editor session is postponed in July for a well-deserved One Richmond staff break. We’ll be back the second Wednesday in August.
From Wikipedia: The first European to describe these plants was Philibert Commerçon, a botanist accompanying French Navy admiral Louis Antoine de Bougainville during his voyage of circumnavigation of the Earth,
More reasons why we love our job. Many of the subjects of our feature stories are so thrilled to be in the local paper they put the paper up in their store window. And, when we walk by and see it, we’re also thrilled! Thank you, Young Artist Studio!
Work Begins on New Traffic Route in Golden Gate Park
Richmond Review

The Internet Archive, located at 300 Funston Ave., is a San Francisco-based nonprofit digital library with the stated mission of storing information on the World Wide Web. In the photo above, Salem Evans, manager of administration at the Internet Archive, stands by a Victor talking machine, which digitizes old 78-rpm records.

Have you ever wanted to read a past article that appeared in the “New Yorker,”

see a classic silent film, hear an old concert or particular verses from a song

played at a Grateful Dead concert, or possibly read an old series of a particular

comic strip that is out of publication?

Well, all of this information and more is now accessible to the public through the

work of the Internet Archive, located in a former Christian Science Church located

that provides free public access to collections of digitized materials, including

million public-domain books. It gets much of its funding from foundations,

government grants and donations from individuals.

The archive is committed to preserving and making America’s cultural

heritage accessible. Because of the archive’s work and its commitment, the

past is never dead.

In addition to its archiving function, the archive is an activist organization, advocating

for a free and open Internet. The Internet Archive was founded by

Brewster Kahle in May of 1996. The archive’s content was not available

to the public until 2001, when the archive developed the

The Great Room, located on the second floor of the building,

is where all of the digitalized material is stored. In the past, the room was the

sanctuary of the Christian Science Church. Standing in front are three-foottall

ceramic statues of past and present staff, looking toward the stage.

a society’s cultural artifacts and to provide access to them. If libraries are to

continue to foster education and scholarship in this era of digital technology, it is

essential for them to expand, says founder Brewster Kahle. Without cultural

artifacts, civilization has no memory and no mechanism to learn from its successes

to education and the maintenance of an open society. By collaborating with

institutions, including the Library of Congress and the Smithsonian, the

archive is working to preserve records for generations to come.

especially on the Internet, has

such rapid turnover these days that total

loss is the norm. Civilization is developing

severe amnesia as a result. The Internet is the beginning of a cure. It is

the beginning of complete, detailed, accessible, and searchable memory for society.”

Protecting stored resources from damage or destruction is an ongoing task,

which is why the archive tries to maintain copies of its collections at multiple sites.

quickly as possible to do the same with the rest. The main issues for the archive

the accessibility of data as formats become obsolete. Realizing the importance

that Internet libraries serve, there is now an effort to promote the formation

of Internet libraries in the United States.

The Internet Archive has data centers in San Francisco, Redwood City and

Richmond. In November of last year, Kahle announced the Internet Archive was building

an Internet Archive in Canada. He feels there is an urgent need to build a

copy of the archive in foreign countries. “On Nov. 9 in America, we woke up to

a new administration promising radical change. It was a firm reminder that institutions

like ours, built for a long time, need to design for change. For us, it

government surveillance is not going away. At the Internet Archive, we are

fighting to protect our readers’ privacy in the digital world,” Kahle said.

The archive collects the bulk of its data automatically from its web crawlers,

which work to preserve as much of the public web as possible. A web crawler is

software that looks at and captures web pages, and the WayBackMachine allows

the archives of the World Wide Web to be searched and accessed. This service is important

and grabs original source code from websites that may no longer be directly available.

The Internet Archive has capitalized on the popular WayBack Machine, whose

name was derived from an old Rocky and Bullwinkle cartoon.

The value and immensity of the archive’s collection is overwhelming.

from around the world.

digitizing about 1,000 books a day for a total of more than 2 million books. The

shows and a wide variety of other audio files. There are more than 200,000 free

100,000 concert recordings from established and independent artists. The images

The archive has received two new additions to its archive, the Trump

Archives, which includes 700 televised speeches, interviews, debates and other

news broadcasts. It was launched on Jan. 5. Also launched was a private collection

of videotaped television news that spans 35 years on Marion Stoke, a librarian, social

justice advocate and television interview program host who believed it was

and never stopped. It was before her death in December, 2012, that she had

140,000 video cassettes. The digitization of such a huge collection will take a number

of years and require additional funding. On Nov. 6, 2013, a fire at the Internet

equipment worth hundreds of thousands of dollars. Some physical materials

were in the scanning center because they were being digitized, but most were in a

separate locked room in the archive. The fire proved to be a reminder that digitizing

and making copies are good strategies for both access and preservation. Since

the fire, the archive has made and continues to make copies of the data at the

Internet Archive, along with his committed staff, will continue so older generations 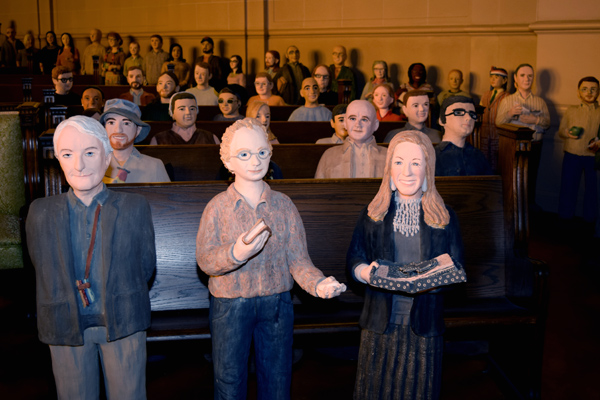 The Internet Archives contains three-foot tall ceramic statues of past and present staff.

Free tours of the Internet Archive are given every Friday, at 1 p.m., with an informative