Despite recent setbacks in the Bay Area arts community, a new hope for the art scene landed in the Richmond District on Dec. 11.

Photo: Philip Liborio Gangi Artist Leslie Andelin points to where she lives on her painting of a map of San Francisco. She says: “My work is about light and movement. I usually start with a poem I’ve written for emotional context of what the painting is about.”

The Avenue 12 Gallery debuted at the corner of 12th Avenue and Lake Street, and the first exhibition features new work by a well-established local artist, Leslie Andelin.

Vince Meyer, who grew up in the Richmond a few blocks away at Lake Street and 17th Avenue, has renovated, re- vamped and renamed the gallery, which he has occupied for 11 years. Formerly, it was known as Table Asia Gallery, which specialized in custom tables made from Japanese antiques. He and his partner, Rachel Murray-Meyer, have integrated that craft into a new venue that also features contemporary art.

But they have even more in mind for the corner space. 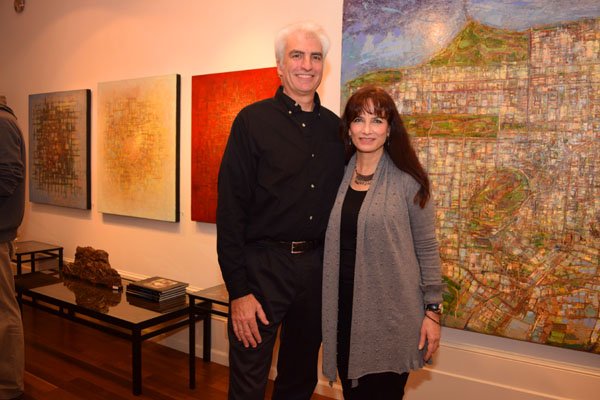 Murray-Meyer likes the idea of shar- ing space with artists.

“We like Bay Area artists … emerging and mid-career artists and we sort of see it that we’re sharing this space with artists because sometimes there’s limited exhibition space,” Murray-Meyer ex- plained. “A lot of things are online but it’s nice to be able to see something in person.

“It’s kind of nice to be out here. We have people who also want to make it family friendly, in the sense that the art is something that kids can come look at,” she said.

The couple kept the fundamentals of the Edwardian building housing the gallery, while completely modernizing the interior by stripping everything down to the studs. It got a seismic upgrade, new, modern, low-voltage halogen lights and a new floor.

“The concept was to mix contempo- rary details with Edwardian details,” Meyer explained. “The building is from 1911, so, when we remodeled all the de- tails we added this very high baseboard, that’s Edwardian. We tried to make it look as it may have looked in 1911, but the lighting and things like that are con- temporary. It’s either brand new or 1911 – that’s the look we were going for.”

And to go along with the new look, the gallery will feature contemporary artists from around the Bay Area creating art with San Francisco themes.

One of the larger paintings that imme- diately catches the eye is of an abstract map of San Francisco.

City last week, after 27 years,” said fea- tured artist Leslie Andelin. “I still have my studio, but now I have to commute. We moved to San Rafael in-part so my daughter could start school over there.”

Andelin said when the gallery owners first approached her about an exhibition during one of her Open Studio events, she did not realize she would be the first artist to have a show at the Avenue 12 Gallery, but it was a case of perfect timing.

“I was at the point right then where I was like, ‘I’m ready to let it go. I’m ready. I’m just waiting for the right people to come along’ and we had a nice conver- sation.

Aside from oil paintings, Andelin also does etchings and creates ceramic sculp- tures. She has a book at the Avenue 12 Gallery showing paintings that go back to 1992, but she has been painting since she was 10 years old.

Murray-Meyer is also an artist, special- izing in fine art photography. At the south end of the upper gallery, stairs lead down to a lower-level room where some of her work is hanging. Near it is a table with various arts and crafts supplies.

“Here we just created a craft table for kids to be able to come in and make something. We’ve had a number of par- ents who were able to stay longer because their kids had something to do,” she ex- plained. In the future, the space could be used for a second artist’s exhibition.

“The Richmond is a vibrant place, so we want to be part of that,” Meyer said. “It’s really exciting for people because we have a lot of walkers and joggers and bi- cyclists on Lake Street. So, there’s some- thing new to see all the time. I’ve got a lot of positive feedback, where the neighbors really enjoy being able to see contempo- rary art in the windows here.”